What Your Yoga Says About Your Personality 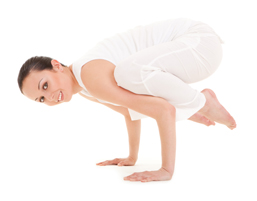 Yogis are stereotypically infamous for their aloof and lackadaisical "California Cool" personalities. In fact, Lululemon founder Chip Wilson has gone on the record saying that they prefer hiring runners over yogis for this exact reason. "When we first started, we hired nothing but yogis. But it didn't work because they were too slow. So we started hiring runners who like yoga. They're more on the ball, more type A," he said.

As a long time practitioner, I know as well as you do that this is just another stereotype. Especially after a few months stationed next to our customer service department, I know that yogis can be as ruthlessly angry, mean and high strung as any other population sample. We are all human, and as yoga becomes increasingly popular, it becomes more accessible to more people. There are several schools of yoga and styles that have been developed in the past 50 years -- which seems like a long time, but yoga originated somewhere deep in the BCs, so relatively speaking, any developments in the past 50-100 years could be considered "new".

I go to yoga class for two main reasons: to reduce stress/relax and to tone/firm my body. There are other reasons, of course. As my practice develops, I find myself going to different types of classes depending on my mood and what want to get out of class. For example, if I am feeling excessively rajasic, I will hit a Hatha class to cool and calm myself down. I prefer Vinyasa in the morning when I am naturally tamasic. When I need a good workout, I cough up the $20 for Bikram, or hot yoga. I have not only tried, but am familiar with, all major styles of yoga (I've even tried eclectic stuff like laughter yoga and deep tissue massage yoga). My experience with each has led me to notice differences in the groupings of yogis and yoginis that attend these classes. More stereotypes? Well kind of, let's call them archetypes. I used my collective experience to compile a list of yoga styles and archetypes that go hand in hand:

• Hot Yoga/Bikram: Most Bikram yogis are there for the workout. Attracted to these studios for the promise of weight loss and 'reaching target cardio rate faster', these recently converted cardio rats have enough money to spend on $90 Lululemon yoga crops and $160 unlimited monthly memberships. Bikram devotees seem to be focused, calculated and meticulous. They are willing to push themselves to extreme limits to achieve their goal. Not the friendliest bunch, but goal-oriented, organized and very put-together.

• Ashtanga: Another favorite of Alphas and Type-A's. My dad only practices Ashtanga because he "likes a good workout". My Ashtanga teacher was standoffish. My other teachers are overly happy and smiley and the Ashtanga instructors I've had were cold and uninviting. Ashtanga practitioners that I know are devoted, and more into the spiritual aspect of yoga than Bikrami's. If you like Ashtanga, a favorite of pittas, you are intelligent, devoted, passionate (which can mean anger problems) and ambitious.

• Vinyasa: If you love this fast-paced, free-form flowing yoga style you are probably optimistic and outgoing. Vinyasa lovers are spontaneous, eclectic, creative and have a good sense of humor. These yogis love to try new things and many go to class with friends and make a night of it.

• Hatha: A favorite of former and current hippies. When I think of Hatha, I think of ladies in their 60's with bangin' bodies and long, sleek grey hair pulled back in a ponytail. Hatha lovers are grounded, meditative and pensive. More so than the other styles listed above because they aren't in it for the "yoga body".

• Restorative/Yin: I associate these slower forms of yoga with the kapha dosha: calm, romantic, strong and caring. Analytical and practical, many yin or restorative yogis are in it for the metaphysical benefits or because their doctor recommended it. Slow yoga fans are introspective and introverted yet very friendly and open minded.

I do not mean in any way to say that all Ashtanga yogis are standoff-ish, these are merely observations and generalizations, for fun! What kind of personality do you have? Is it in line with your practice?