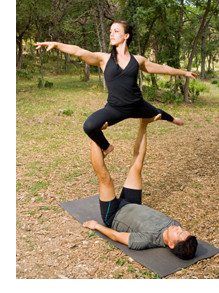 Are you looking to take your yoga practice to a new level, literally? Acroyoga is a relatively new style of yoga that combines traditional yoga with acrobatics (think: Cirque du Soleil), performance, and healing touch. Using a partnership system including a base (usually a man), a spotter (man or woman), and a flier (usually a woman), an aerial form of yoga is performed. Acro builds total bodily strength greatly (especially for the base), interpersonal bonds and provides the therapeutic sensation of flying.

As an observer within the community, there seems to be two distinct opinions on Acroyoga: you either love it or hate it. Personally, I am not a fan. But it's not because I don't think it's a neat idea (I do!) or because I'm creeped out by sweaty yoga guys (I kind of am, sometimes). It's just that I do not like excessive touching. For me, it is too much. There's usually only one non-creepster in the bunch; I have an irrational fear of feet (that are not mine… mine are pristine and gorgeous); and, there is usually a bit of partner massage in each session. Like I said, too much feet and gropey hands on me and I am liable to snap. So I go every so often just to watch. It looks amazing. I can see student's strength and physical bodies heal and improve drastically month to month.

Not my cup to tea, no… but I have a lot of respect for this adventurous form of yoga, and am somewhat jealous of the lazaifaire, free-love, flying by the seat of the pants attitude that all the Acronians I have met in my day seem to embody. As a young girl, I always dreamt of flying. But the kind of flying that is seen in the 1954 play Peter Pan, featuring Mary Martin, when the actors and actresses were hoisted up above the stage and swung from side to side with harnesses (I am completely guessing how) and roping. I know I will never be ‘Wendy Darling' as my childhood is completely kaput, but this remains a lifelong dream - to be suspended on stage giving the illusion that I am indeed, flying. So I notice the appeal. The feet are a deal breaker, and I don't trust most men that get into acro not to have some sort of ulterior motive. I know the good ones are out there so that's what has allowed me to give it a few tries. But you never know. I just don't want to find myself in the midst of an uncomfortable situation.

Things I do love about Acro: the flying sensation is beautiful, expressive, and free. No better words to describe it. Plus, it looks awesome. Having trouble getting into crow, side crow, handstand? Or just looking to build a ton of strength or enhance your balance, boot-camp style? Try Acro. Acro for many of those I know who practice religiously, notice a complete mind and body transformation. The classes begin in an outdoors environment if the weather allows for it - like a park or grassy field. Classes begin in a circle and the group talks about their feelings and any injuries or discomfort they may be feeling. Then they are partnered up, if they did not bring their own partner. It is possible some of my bitterness comes from the fact that I want an acro buddy to really get involved in this tight-knit subsection of yoga. Acroyoga was started in 2002 by a husband/wife team who have backgrounds in acrobatics as well as yoga and massage. To learn more about Acroyoga specifics, check their official site, Acroyoga.org.

Now, if my current boyfriend would actually TRY yoga and became my yoga buddy, maybe we could graduate up to an acro class months down the line. I beg my boyfriend weekly to try the gentle class on Saturday to at least give him the chance to discover a form of exercise me might just like. Think of the antonym to the word of ‘athletic' and this describes my Ebin. It's okay, opposites attract, but I am not ready to delve into the seriously tight-knit subsection that is Acro until I can trust and rely on a partner. With a devoted partner, I would be more inclined to really give this form a shot, instead of simply observing and successfully wallflowering the entire group.

Have you tried Acro? Do you love it? Hate it? Do not understand it? Leave us your comments and experience. We would love it hear from our favorite yogis and yoginis, the Yoga Direct yogis and yoginis!